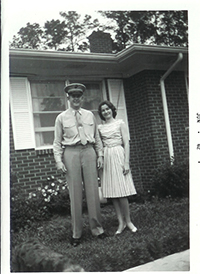 John and Joyce Murtha in North Carolina in the 1960s. 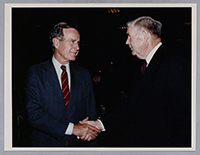 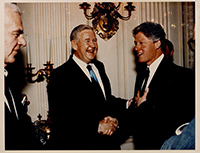 Letter addressed to George W. Bush in which John Murtha and other members of Congress express concern about the war in Iraq, 2006 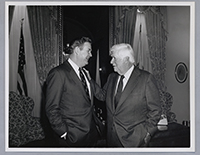 With Speaker of the House Tip O’Neil, who acted as a friend and mentor to John Murtha, 1980s. 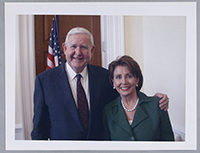 John Murtha with Speaker of the House Nancy Pelosi, who often worked alongside Murtha with regard to defense issues, 2000s. 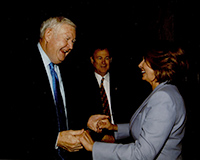 Murtha met his future wife, Joyce Bell, while she was working at an insurance company near Camp LeJeune, North Carolina, and he was in the Marine Corps. They were married June 10, 1955. Joyce was a stalwart community advocate alongside her husband. She helmed efforts to open her namesake, the Joyce Murtha Breast Care Center at Windber Medical Center, and helped to create the Windber Research Institute. She has been supportive of hospice programs such as Children’s Hospice International, as well as supporting the Girl Scout Council in her region. Mrs. Murtha also served as honorary chairperson of the Johnstown Opera Festival. Beyond her many roles in the Johnstown community, she is active in other positions in Washington D.C. In 1997, she christened the USS Bonhomme Richard (LDH-6).

Murtha was very active in his role as a leader in Congress assisting and supporting the administration of President George H. W. Bush. He served as a Co-Chairman for the elections in Panama and was a very strong supporter of Operation Just Cause, which deposed Manuel Noriega in 1989. Subsequently, he was a member of a small group of congressmen and senators whose counsel and advice was sought by the President in the run-up to Operation Desert Storm to liberate Kuwait in 1991. Despite President Bush’s reticence, Murtha strongly believed that Congressional approval was required to militarily evict Iraq from Kuwait and was one of the leaders in the House of Representatives that ultimately secured that approval. Finally, his counsel was sought in the humanitarian deployment to Somalia mere weeks before President Clinton was to take office.

Murtha also had a close working relationship with President Bill Clinton as his counsel was frequently sought as an expert on military and international affairs. This relationship stemmed initially from the 1993 crisis in Somalia, which had transformed from a humanitarian mission under President Bush to a United Nations building effort. The effort resulted in a significant loss of US military personnel in the fall of 1993. Murtha personally met with the President after visiting Somalia in October 1993 and informed him that Congressional support for the effort no longer existed and worked with the administration on a withdrawal plan. He also played a key role in the formulation of US policy in the Balkan region. Based on numerous visits to Bosnia, Croatia, and Macedonia, he advised against the deployment of US and NATO personnel on the ground until a peace agreement was in hand, which is exactly what occurred after the signing of the “Dayton Accords” in 1995. Murtha also had a personal relationship with President Clinton and occasionally played golf with the President. When leaving the Oval Office, President Clinton presented a putter to Murtha. He maintained the close relationship with the Clintons until his death.

Murtha maintained a professional relationship with President George W. Bush. He was part of a small Congressional delegation invited to brief the President in Texas prior to the inauguration. Murtha counseled President Bush that the two most important National Security issues facing the United States were terrorism and nuclear proliferation. After 9/11, he strongly supported the administration on its efforts in Afghanistan and, in 2002, he voted to provide the authority to the President to invade Iraq. Beginning with visits to the Middle East in 2003 and based on discussions with senior administration officials and military leaders, he became very concerned that the administration lacked a viable plan for the effort in Iraq. He wrote to both the President and the Secretary of Defense on equipment shortages that he had observed and his concerns were, to a large extent, ignored. This apparent lack of concern by the administration is at least partially responsible for his decision to come out against the Iraq War on November 17, 2005.

When Murtha arrived in Washington, Thomas P. “Tip” O’Neill almost instantly became his mentor and friend. The Speaker of the House, Carl Albert, was out of country when Murtha was to be installed. Therefore, O'Neill administered the oath of office as then-majority leader. O’Neill served as Speaker of the House from 1977 to 1987. O’Neill frequently chose Murtha to preside over House sessions. He sometimes asked Murtha to make inspections at a location where foreign policy was tenuous, especially if it involved the deployment of United States troops. One such trip was in 1982, when he asked Murtha to go to Lebanon with a Congressional delegation to inspect troops and meet with President Hosni Mubarak in Cairo.

Murtha was one of the strongest supporters of Representative Nancy Pelosi. In addition to serving with her on the House Appropriations Committee, he was her closest advisor on military matters. Murtha was a key ally and supporter of Pelosi from her earliest days in Congress and as she moved through the leadership ranks, becoming Speaker of the House in 2007. Likewise, she actively supported him in his bid to become Majority Leader. In her first trip to visit troops and, just prior to the invasion of Iraq in 2003, she accompanied Murtha on a visit to Kuwait, Qatar, and Turkey. Murtha held Pelosi, who served as Speaker from 2007-2011, in high regard. His personal notes describe her as “tough” and “never taking credit for her own accomplishments."