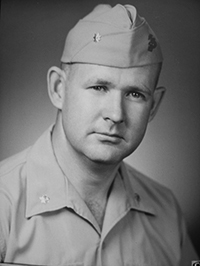 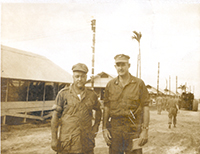 John Murtha with Sgt. Lehmer at DaNang Airbase in Vietnam, 1966. 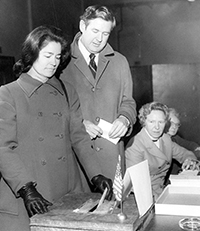 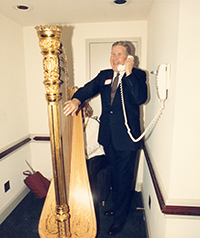 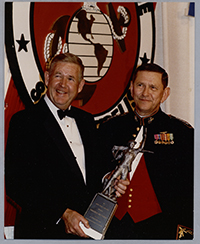 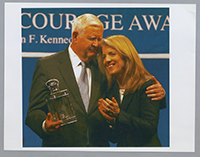 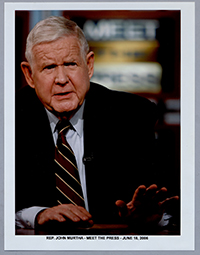 John Patrick “Jack” Murtha, Jr. was born June 17, 1932 in New Martinsville, West Virginia, and spent most of his early life in Mt. Pleasant, Pennsylvania. He attended Ramsey High School, where he lettered three years in basketball and football, graduating in 1951. He then attended Kiskiminetas Springs School before enrolling at Washington & Jefferson College, where he once again played football.

Strong feelings about the Korean War and patriotism led him to enlist as a private in the United States Marine Corps in June of 1952. He was assigned to the 13th Officer Candidate Screening Course and, upon completion, was commissioned a 2nd Lt. in the United States Marine Corps Reserve. In 1955, he finished two and a half years of active duty as a 1st Lt. in the United States Marine Corps. Following his time in the service, Murtha then used the GI Bill to attend the University of Pittsburgh while working full-time.. He and his wife, Joyce, moved to Johnstown, Pa., in 1958 with their three children (Donna, John, and Patrick). Murtha was the owner and manager of the Johnstown Minute Car Wash, the first of its kind in Western Pennsylvania, servicing up to 1,200 cars on Saturdays and with a team of 36 employees.

Murtha attended the University of Pittsburgh at both the Johnstown and Pittsburgh campuses part-time in order to complete his BA in economics by 1961. He took several graduate courses at Indiana University of Pennsylvania, but did not complete them because he volunteered for active duty in Vietnam in 1966. Murtha spent one year as an intelligence officer with the First Marines. He was wounded twice while participating in five major operations south of Da Nang, and for these injuries, he received the Purple Heart and the Bronze Star Medal with "V" device.

During his military career, Murtha was honored with multiple awards, including the following:

After returning home, Murtha began his political career by winning the Democratic nomination for U.S. Representative for the Johnstown district. He lost in the general election, however, to longtime incumbent Republican John Saylor. Nonetheless, Murtha tried again and was elected to represent the 72nd legislative district in the Pennsylvania House of Representatives in a special election in the spring of 1969 upon the death of Rep. Edward McNally. Murtha was then elected to a full term in 1970, and served in this capacity until 1973.

For the next 36 years, Murtha would play an integral role in areas such as defense, energy, and healthcare. Additionally, Murtha aimed to advocate for those in his district and create economic opportunities for his constituents. As examples, he co-founded the Congressional Steel Caucus in 1979 and was successful in bringing a number of companies and institutions into the region, including Sony and Carnegie Mellon University's Computer Energy Response Team, and the Software Engineering Institute, among others.

In addition to a prominent presence on the national stage, Murtha also played a key role in advising on and acting with regards to international affairs. In his time in Congress, Murtha visited nations such as Bosnia, El Salvador, Guatemala, Lebanon, and the Philippines to survey and assess the situation and advise what role the United States should play.

On November 17, 2005, Murtha came out as an opponent of the war and occupation of Iraq calling it a "flawed policy wrapped in illusion." While those in support of the war, including President George W. Bush, condemned Murtha's remarks, many applauded his efforts and his courage to speak out against the conflict.

As a result of his work legislating on behalf of his constituents, as well as the nation’s armed forces, Congressman Murtha was honored with numerous awards throughout his career. These include the Pennsylvania Distinguished Service Medal, Pennsylvania National Guard Minute Man of the Year Award, the United States Marine Corp Iron Mike Award, and the John F. Kennedy Profile in Courage Award.

The Passing of John Murtha

On February 8, 2010, Murtha died from complications of gallbladder surgery. After 36 years in office, he was the longest serving congressman in Pennsylvania history. Perhaps Representative Rush Holt (D-NJ) said it best with his remarks on the floor of the House (CR H801):

"We will miss Jack Murtha. Strong-willed, plain spoken, fearless, dedicated, patriotic, honorable, and remarkably generous with his time, his wisdom, and his advice.
We will not see the likes of him."