John Murtha at the ribbon cutting for the Westmoreland County Department of Public Safety. c. 2000.

John Murtha observing damage from the Johnstown Flood of 1977.

John Murtha observing damage from the Johnstown Flood of 1977. 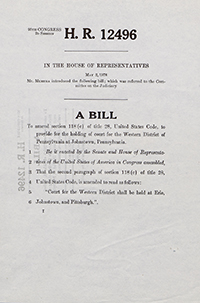 A copy of H.R. 12496, a bill that provides for the Western District Court of Pennsylvania to be held in Johnstown. It was introduced by John Murtha in 1978. 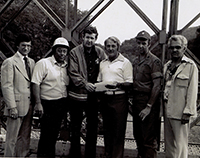 John Murtha and others at the Bailey Bridge in New Florence, PA after the Johnstown Flood. 1977.

Johnstown and the 12th
Congressional District

The 12th Congressional District, Murtha represented for 36 years (1974-2010), is a district that has been rearranged over time but generally encompasses a large swath of southwestern Pennsylvania surrounding the Johnstown area. While Murtha was in office, the 12th Congressional District included all of Greene County and parts of Allegheny, Armstrong, Cambria, Fayette, Indiana, Somerset, Washington, and Westmoreland Counties.

With his origins in West Virginia and southwestern Pennsylvania, Murtha was prepared to represent the citizens of the 12th Congressional District and the main industry of their livelihood: coal and steel. These pivotal industries were in a precarious position by the time he took office and the slow decline was worsened by the 1977 Johnstown Flood, bringing severe unemployment to the region. After the flood, all the federal, state, and National Guard efforts using President Jimmy Carter's helicopter as a command post at the Johnstown airport. Murtha spent as much time as possible in his Johnstown offices to meet with locals to assist the community in overcoming tremendous adversity. His dedication to the district persuaded steel company Bethlehem Steel to keep 7,500 jobs in the Johnstown area following the flood – another action which undoubtedly allowed the area to continue on its path to recovery.

This recovery came in many other forms, including the co-founding of the Congressional Steel Caucus in 1979. The caucus is a group of 100 bipartisan members of Congress from districts with steel manufacturers and interests. Murtha continued the stabilization of Johnstown and the surrounding region’s economy by committing to many projects and programs, but he was especially instrumental in bringing defense contracts into the district through the US Government. These endeavors led to the area becoming a hub for military industry.

The formation of the Johnstown Area Regional Industries (JARI) and the creation of the Showcase for Commerce, an annual exposition for government and defense industry contractors in Johnstown, established a new and diverse industry in the region. JARI, founded in 1974, is a non-profit economic development organization that has been hugely important for the businesses and communities in Somerset and Cambria counties. The Showcase for Commerce brought defense contractors to the Johnstown area, which in turn created countless jobs and brought a needed influx of money to the people of the 12th district.

Under JARI, Murtha helped establish the Procurement Technical Assistance Center – a program that provides government contracting assistance. The center helped to pull government defense contracts into the 12th district, and because of this about 200 defense companies were aided, including global security and aerospace company Lockheed Martin and defense contractor DRS Technologies. Murtha also brought jobs and money to the area through ventures other than defense contracting. He helped establish the Johnstown Area Heritage Association (JAHA), a non-profit organization with the goal of preserving and providing access to museums, special events, cultural and educational programming, and historical collections that are significant to the region. Nationally recognized sites in the area also gained funding through JAHA, such as the Fort Necessity National Battlefield, the Allegheny Portage Railroad National Historic Site, and the Johnstown Flood National Museum.

The many contributions that Murtha made to his district throughout his 36 year political career have helped people of the district in countless ways. He helped bring jobs and resources to an economically downtrodden area and helped to rebuild the region. His legacy and dedication to his district will last for years to come.